Screwing the Name Up: HB edition


A while ago I wrote about the spelling Walt Dinsey. Today, I'll be talking about Hanna and Barbera. We all know that William Hanna and Joseph Barbera defined animation history but some believe their names are Joseph Hanna and William Barbera. The difference between these examples and the ones in the Walt Dinsey article is that these examples are from official books or from sources specializing on the subject of animation. 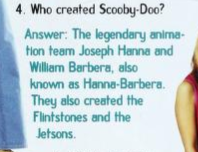 The next example is from the book Animation and the American imagination, they make the same horrible mistake. Telling me not to buy the book!